Beyonce wanted the WORLD TO KNOW that she’s still TEAM SOLANGE . . . and that’s DESPITE the fact that Solange punched, kicked, and SPIT on her husband. This is CONSISTENT with what we’ve been saying ALL ALONG . . . that Bey was co-signing Solange’s behavior

Maybe Beyonce did take sides with her husband but not in the glare of the cameras.She is that classy.

A day after the fight, Beyonce posted a prayer on Instagram and many were shocked because it was unusual of her(atleast on Instagram)…

Then as confirmed by E !Solange has deleted all photos of Beyonce leaving just one which she took with a friend..

This shows Beyonce may have chastised her off camera. Remember, the bodyguard was there and could one day write a tell all book,so Beyonce may have decided not to compromise her Multi-million dollar brand over her an elevator scuffle.Besides that brand was partly built by Jay Z.Beyonce has established herself as a queen..Queens don’t fight lol..see her response below END_OF_DOCUMENT_TOKEN_TO_BE_REPLACED

A video showing Solange, Beyoncé Knowles’ sister attacking her husband, Jay Z in an elevator went viral on Monday with many wondering what could have gone wrong.

The incident happened at the Standard hotel after the Met Gala, held at New York’s Metropolitan Museum Of Art on May 5 and was captured on surveillance camera but was only released on May 12, 2014, Monday. END_OF_DOCUMENT_TOKEN_TO_BE_REPLACED

Beyonce’s sister Solange attacked Jay Z in an elevator…kicking, swinging at him and even spitting on him and it was captured on surveillance video. They were trying to keep it quiet but TMZ has obtained the video. How disrespectful Solange! Her elder sister’s husband? And what’s with Beyonce not trying to calm her sister down? Read the full report below

TMZ reports;
Jay Z was ferociously assaulted by Beyonce’s sister Solange … who was wildly kicking and swinging at him inside an elevator … and the attack was captured on surveillance video … obtained by TMZ.
According to our sources, it all went down at a Met Gala after party last week at the Standard Hotel in NYC. In the video … Jay Z, Beyonce and Solange step into the elevator … and then Solange goes crazy, screaming at Jay before unleashing a violent attack. A large man — who appears to be a bodyguard — attempts to hold Solange back, but she manages to connect at least 3 times. At one point Solange throws a kick and Jay grabs her foot, but never attempts to strike her. Beyonce stands by without getting physically involved. It’s unclear what triggered the fight.
And this is interesting. When you look closely, you see the bodyguard hit the emergency stop switch on the 12th floor — mid fight — presumably to keep the fight private.
All three walked out of the building together — Solange looks pissed — but while Bey and Solange get in one car … security walks Jay to a different one.
See the video after the cut… END_OF_DOCUMENT_TOKEN_TO_BE_REPLACED

The power couple were having a romantic private moment on their private yacht during a recent holiday…and paparazzi did the unthinkable. They zoomed in their camera and took pics of Jay Z giving Beyonce what looks like ‘The Finger’. *cough* See for yourselves after the cut…18+ END_OF_DOCUMENT_TOKEN_TO_BE_REPLACED

She may be touring the world as a solo artist, but at least Beyoncé Knowles has her baby daughter to keep her company.

Taking a break from the nightly performances, the mother-of-one spent some quality time with Blue Ivy at the pool of their hotel in Miami Beach, Florida.

Soaking up the sunshine, Beyoncé, 31, and 18-month old Blue looked every bit the loving mother and daughter on Thursday afternoon.more pic after this END_OF_DOCUMENT_TOKEN_TO_BE_REPLACED 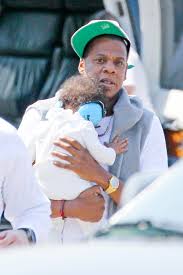 Jay-Z has crushed the rumours that his wife, Beyonce, is pregnant with their second child. Lately the internet has been abuzz with stories and pictures suggesting that Bey is pregnant but during a recent interview the rapper stated that the rumours are “not true”.

BEYONCE has revealed she does not sing her hits to her baby daughter – because she is scared the tot will hate her voice.

The superstar said she fears singing to Blue Ivy in her performing voice in case she starts crying. END_OF_DOCUMENT_TOKEN_TO_BE_REPLACED

I’m talking about their combined wealth o. Jay Z is worth $475million and Beyonce about $400million. With all the stuff they have lined up this year, analysts predict they will hit the one billion mark.
Beyonce’s new H&M deal, her Mrs. Carter Show world tour, which will bring in $115 million, her $50 million endorsement deal with Pepsi and Jay Z’s upcoming Legends of the Summer tour, along with his various other ventures, will put the power couple over the billion dollar mark this year.

Beyonce has released promo shots and also announced the dates of her ‘The Mrs Carter Show – World Tour,’ which will begin on April 15 in Belgrade, Serbia and move to 14 other countries in Europe, then back to the US where she will perform in 19 states plus two shows in Canada. Wow, Beyonce! That’s a lot of singing and dancing. Some of the shows are even back to back.